It wouldn't surprise me if you missed the publication of Frieda Ekotto's Don't Whisper Too Much / Portrait of a Young Artiste from Bona Mbella (translated from French by Corine Tachtiris). Published in 2019 by Bucknell University Press and distributed by Rutgers University Press, this isn't exactly a major publishing event. There's a part of me that also feels that it shouldn't be a major publishing event, because queer African literature in translation should simply be a natural part of our literary landscape. And yet... we're nowhere near that reality. 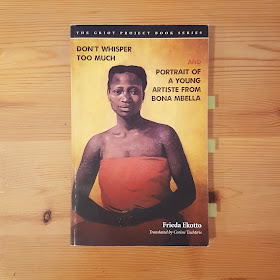 On each level, Ekotto reflects the ways in which bias pervades our literary consciousness. In her introduction, Lindsey Green-Simms tracks the difficulty Ekotto had in initially publishing Don't Whisper Too Much in French, writing: "Ekotto persisted for ten years until the novel was eventually picked up in 2001 by Editions A3, a small publishing house in France, and then reprinted in 2005 by L'Harmattan, who also published Portrait in 2010. Thus, even the publication history bears the traces of confinement and the difficulty of breaking through power structures." That it would take almost two more decades to publish Don't Whisper Too Much in an English translation doesn't even surprise much. The WIT publishing gap is especially wide when it comes to African women writers in translation (particularly black African women writers, it should be noted), and it's not as though the English-language market is particularly eager to embrace queer stories from outside a handful of highly specific (and often fetishized) narratives.

And yet Ekotto's work is, surprisingly (and pleasantly) enough, not the only queer book by an African women writer to be translated into English in recent years. While there is absolutely no similarity between these books in either writing style, storytelling approach, subgenre, or even broader socio-political context, my immediate association is with Trifonia Melibea Obono's La Bastarda (translated from Spanish by Lawrence Schimel). It's an unfair association for both works, largely borne only because both books deal with African love between women, but I think it's also reflective of why we need more stories like this - each represents a wholly different experience and perspective on queer African women. That's exactly the point of why we should all be trying to read more widely, in that eternal effort to avoid Chimamanda Ngozi Adichie's single story and experience the world through different voices.

It further helps, I think, that this book comes in a bundle. Don't Whisper Too Much and Portrait are two very different works, both in terms of style, narrative voice, and "messaging". There's a lot to learn from both works individually. From a purely literary perspective, however, I wasn't able to read the two fully back-to-back (I paused for a few hours between the two halves), and I think that the stylistic differences of each work would have been better served by a cleaner separation. Oh well.

Don't Whisper Too Much is the first of the two works, and the more... I suppose the word "lyrical" or even just "stylistic" is the closest way to describe it. It's a story that feels somewhat removed from time, hovering at the outskirts of village life and shifting narration and era in a way that feels consistently fluid. I also felt this fluidity in the central, encompassing "love story" that forms one of the pillars of the novella, something in the way Ada seems to move between childhood and adolescence in the context of her growing love for Siliki. This style isn't always my favorite, and I have to admit that it didn't always work for me here either. Parts of the story felt like they connected all too loosely, and I found myself somewhat at a loss when the story ended. This is partly intentional with several stories explicitly untold by the novella's end, but it didn't make me feel any less... unsettled. Perhaps that was the point.

Other aspects, however, struck me hard. The storytelling theme translates much more specifically into the promised whispering from the title. Ekotto frequently returns to this theme of women's voices and women's intimate stories, whether in Siliki's stories of her mother, the lessons Ada learns from Siliki, or Ada's own storytelling around Siliki's daughter Affi. Early in the story, Ada "[...] decides to give her own version of the story of the old legless witch. No matter what, she must tell her own story, which includes the stories of all women without voices, condemned to muteness." This follows her passionate interest in Siliki, even before "gain[ing] admittance to her refuge". Ada draws parallels between her own status as a cast-aside daughter and Siliki, the legless hermit. Later, Siliki's voice literally rings out: "The force of Siliki's voice awakens [Ada's] entire realm, not because she speaks loudly but because her voice overflows with a strength that envelops every creature's soul in immense joy." Yet in the very next passage, Siliki is whispering. Later still, deep into their relationship, Ada reflects on the lessons she has learned from Siliki: "Siliki once told her how important it is to sculp violent words onto her skin. The hollow of the text always loses its strength, but a woman's text - a text that inscribes her pain - is powerful. A woman's written story is not at all saturated; on the contrary, this writing is animated by the sign of survival, the symbolics of life where language is traced." In a novella where women's texts outlive them and carry their stories onward in direct and plot-relevant ways, it's hard not to feel that this theme of words, stories, and women's voices (particularly in the context of queer love) is the most important pillar on which the novella stands.

There are other themes as well, alongside subplots and side stories that are effective to varying degrees. In one thread near the novella's end, Ekotto introduces an American couple that, while moving the story forward in a relatively minor way, seem mostly to present a social commentary on many "Western" attitudes toward African villagers. "'We want to observe the marriage ritual of the Fulani culture. These poor women are victims, oppressed, bullied by their traditions. It has to be exposed!'" This proclamation triggers a fierce response from a new of Ada's, Nafi, who criticizes the "anthropological" approach of Westerners coming to Africa and ultimately describes (albeit not in these exact words) the ways in which different cultures may define things differently, and particularly what that means for women. This section of the novella also comes with a slightly tighter, more traditional writing type; it's a fairly jarring shift, and despite appreciating many of the cool observations Nafi and additional friend Sula whip out in the face of American obtuseness, I'm not entirely sure that the story flowed well around it. The tonal shift along with my general preference for tighter stories meant that I came away from Don't Whisper Too Much feeling somewhat disappointed.

Portrait of a Young Artiste from Bona Mbella, in contrast, feels like a much more "standard", straight-forward narrative. A short story collection that alternates narration and storytelling style and is deeply rooted in modern city life, it ends up feeling wholly distinct from Don't Whisper Too Much. I also, accordingly, ended up enjoying it a whole lot more. There's something a lot more casual about Portrait, whether in its quiet, sly self-references linking the stories together, or its portrayal of life in Bona Mbella, or the way love between women simply seems like a natural part of the world. The more structured nature of the short stories also meant that I felt like I was better able to follow what was happening within each vignette. I thoroughly enjoyed the short collection, and though I liked both Ada and Portait's primary narrator Chantou in relatively equal measures, I felt like the mysteries and vagueries of Chantou's life were more justified within the context of her (short) passage through time. Portrait felt like a series of crisp, detailed snapshots, filled with characters who felt real even without much explanation or exploration.

Together, these two works form an odd whole, but it's very much a whole worth seeking out. Not all of Ekotto's different writing styles worked for me in the same way, but all were still remarkably effective in getting their story across. Even at the moments that I felt most disconnected from the text, I still had the pressing need to keep reading, to keep listening, to keep seeking out those stories that Ekotto was bringing forward. Later, in Portrait, there was also a sort of comfortable rhythm keeping the stories moving from scene to scene. The stories all work in different ways, but that too can be seen as part of the appeal; the way different voices leap out of the page across the various stories and sub-stories is another bonus. Not everything will work for every reader, but you're likely to find that one theme or perspective that will work for you, and it'll be totally worth it.
Meytal Radzinski
Share