It was not easy compiling this year's 50 Day Countdown. Last year, I set myself what seemed like an impossible challenge: I wanted to highlight 50 women writers in translation from 50 different countries, languages, ethnic backgrounds, or cultures. I further made a specific, concentrated effort to promote women writers from various non-European backgrounds, as my own little way of fighting back against Eurocentrism. I ended up managing to build that list, but it was hard, involving seemingly endless Wikipedia searches and digging within databases. I couldn't imagine doing something like that ever again.

So naturally, as WITMonth approached this year, I decided to set myself a similar-and-yet-totally-different challenge. After noticing last year how relatively easy it was to find women writers in translation from certain countries or cultures (e.g. Japan, Korea, China, Mexico, Argentina) versus others (basically the entirety of Africa), I knew I mostly wanted to focus on African, African-diaspora, and Caribbean women writers (as well as whatever South/Southeast Asian and Middle Eastern writers I happened upon). And after last year's struggle in finding well-publicized women writers from these countries (as well as other underrepresented regions), I knew that I didn't want to limit myself to books that had already been translated into English.

This means that the final list of 50 women writers from around the world is one that's largely comprised of authors unfamiliar to me. Many were originally written in French (a language I very much do not speak or know how to read, though I can muddle my way through a Wiki entry), a small percentage have been translated into English though I haven't read the books yet, and I've read full works by exactly two of the authors featured (one in the untranslated original and other in translation to English; since publishing the list and writing this post, I've also read another). I can't really call this a list of recommendations. 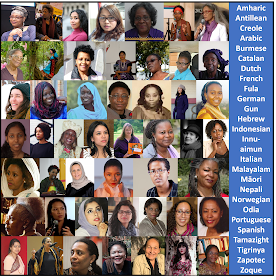 Why shouldn't we truly have access to the world?

The 50 women writers featured in this year's WITMonth Countdown were almost all new to me. I spent hours tracking down their works, trying to find out whether they were still in print in translation (if indeed they'd ever been...), or to understand just how many prizes they'd won over their careers. Many have been featured in translation in poetry collections or magazines, but these are snippets, tiny samples of mountains of literature. As I already mentioned, many of these writers write in French, the most translated-from language into English. So why are so many of these writers in particular unavailable (or functionally unavailable) in translation?

I want to emphasize one of those points again: One of the things I looked for while compiling this list was award-winning writers. I actively sought writers who had been recognized for their works in some form (not simply through translation), often finding writers with decades of accolades and acclaim to their names who hadn't been translated into any language that I could track down. (I would often search for the author's name in French, German, Spanish, Portuguese, and Hebrew language sites, as these are languages I can mostly navigate sites through.)

One of the longstanding "arguments" against the women in translation project is that of "quality", that there are both fewer women writers in languages other than English (often a false claim itself, though highly-language dependent...) and that they are often less acclaimed than men (often a false claim as well, and one that ignores the fact that just because bias exists across borders doesn't mean it should actively cross borders). The prevalence of award-winning writers refutes both claims, because even if we were to assume that those were valid arguments for bias in English (which I absolutely do not), it's obvious that many award-winning women writers are not translated. Are some award-winning men also not translated? Without a doubt, and many of the biases in place against women in translation from underrepresented backgrounds also exist against men in translation. This is important to remember.

My hope is that lists like this year's 50 Day Countdown become the norm in two ways. The first is in that wishlist of truly seeing the world in our literature in all its different shapes and perspectives. The second is that lists span languages and translation status as a means of promoting works for translation. A few readers have commented on this year's list with their own hope that it will somehow convince publishers that there's an interest in these specific books and that this list would be the catalyst to getting them translated. This is certainly my hope as well. As I said earlier, I can't vouch for the quality of almost all of the listed authors (even many of those who have been translated), but I can unequivocally state that I'm interested.