This post is a long time coming. It is also an extremely difficult one to write, but here we are.

I have long prided my independence as a book blogger. This is something I've written about separately, here and there, but the truth is that I've always wanted to remain strongly independent as a blogger, because I do not want to feel beholden to anyone in the publishing industry. Much as I respect and admire many voices within that framework (publishers, writers, translators), I cannot view myself as one of its ranks. And because of this, I also feel comfortable ostensibly burning bridges where necessary. This is why I felt comfortable pushing back against Dalkey Archive's absurd argument that they had said enough on the matter of women in translation, back in 2015. (Note that the link to the original thread is now dead, but Dalkey's responses remain up.) When push comes to shove, my duty is to truth and reality, not to any one publisher or voice in the publishing industry.

I have, however, largely avoided challenging publishers publicly and directly. For years, I've politely reached out to publishers to get their statements regarding the dearth of women writers in their catalogs. Archipelago were one of those that ignored me most frequently, rather outrightly. Eventually, I got a placid reassurance that they are working on the matter. That was 2019. Now, in 2021, I can rest assured that the benefit of the doubt that I gave them at the time was unwarranted. Enough is enough.

I have purchased plenty of books from Archipelago Books over the years. I have also recommended them plenty, seeing as one of my absolute favorite books of the past decade is from their catalog (Scholastique Mukasonga's Cockroaches, and yes, you should read it if you haven't yet). I am also on their mailing list, and as such frequently receive their self-laudatory calls for donations and support. But we'll get to that shortly. The point is that I'm not writing this post out of a sense of cancelling Archipelago. I have no interest in folks no longer buying their books and penalizing their authors (particularly not their brilliant women writers), I am interested in Archipelago getting their act together and acknowledging and addressing their bias against women writers.

Here's the deal: I tallied up all of Archipelago's publications. Both in translation and not (though the overwhelming majority are in translation). Archipelago and their children's imprint Elsewhere Editions. All the books, of all times per the website. And the conclusion is stark: Archipelago Books apparently does not have any interest in publishing women writers. Among their publicly cataloged books, they have 153 books exclusively written by men, 1 anthology written by both men and women, and only 27 books exclusively written by women. For those who don't want to do the math, that's 15%. Or, in visual terms: 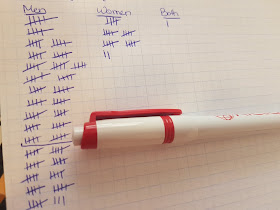 And at Elsewhere Editions, their children's literature imprint? Well, going by authors (which is how I judge the women in translation project), Elsewhere Editions has published a grand total of 15 books by men authors...

...oh, sorry, were you waiting for the number of books by women writers? You'll have to wait until they publish one. (Reminder: Elsewhere Editions was founded after I began the women in translation project/WITMonth and after several attempts to contact Archipelago about their massive gender imbalance in the parent catalog. They knew.) Let me reiterate this point: A children's literature imprint has somehow managed to publish 15 books of which none are by women writers. Children's. Literature. No women.

If I sound exasperated, it's because I am.

Archipelago are a disaster when it comes to publishing women writers, plain and simple. Across the board. No matter how generous I would like to be, it's simply impossible to come away from this data and not recognize that something very rotten lies as its core. Moreover, I have little desire to be particularly generous, given the ways in which Archipelago seem either willfully unaware (or cynically mocking) of their astonishing gender gap. Last year, I was stunned to receive an email regarding Elsewhere Editions, that, in their words, "respond[ed] to the urgent need for diversity in children's literature". This email was a call for donations, and possibly a successful one, based on the subsequent donation requests I have received since. It is difficult to express how unsettled this email left me; how, I wondered, could a publisher of all men writers from a majority Western/Northern European countries (overwhelmingly white, otherwise) cite diversity without feeling at least the tiniest bit of shame and self-awareness?

It's not the first time this sort of cynicism has emerged, at least on my part. Against all odds, Archipelago are sporadically involved in WITMonth, with occasional promotional tweets and discounts. Just this month, I received an email regarding their ongoing WITMonth discount, attached with what looks like a very respectable list of women writers, until you realize they included works with women translators, and also that the list is actually way shorter than the 80 or so which would bring them close to the parity mark. Women, it seems, are perhaps not worth actively seeking out and publicizing, but excellent as a marketing device?

I'm writing this all with the knowledge that my individual post won't make a difference. It's not as though I haven't reached out to Archipelago in the past. In the first few years of the women in translation project, they simply did not respond to my queries. In 2019, they gave me the laundry list of individual case studies, without acknowledging the broader picture and existing imbalances. And it is clear that they did not make any active effort to change matters. As of writing this post, the latest catalogue on Archipelago's website is their Fall 2020/Spring 2021 collection, which has 1 English-language work by a man writer, 8 books by men in translation, and 3 books by women in translation. 25%! Elsewhere Editions remains woman-less, though there is at least one woman illustrator (huzzah...?). At this point, I see little point in personally reaching out again.

As I mentioned at the top, Archipelago have published some of my favorite works of the past few years and have a remarkably interesting catalogue overall. It's important that we as readers acknowledge the good alongside the bad. But we as readers have to seriously address when publishers are simply not up to snuff. And we have to do something. We have to make sure that Archipelago understand that this isn't acceptable. The cherry-picking of individual women writers is not an acceptable response to a catalog of bias and omission.

I ask readers of this blog (and all WITMonth aficionados) to make your voices heard. Tweet at Archipelago. Write to them. Make clear that your support of their publications (whether during their donation drives or otherwise) is contingent on them actually publishing women writers. #PublishWIT, as far as I'm concerned, should go viral. While Archipelago are far from the only publishers out there to stumble in this regard, they are one of the most egregious. It's time for this to change.

In case anyone was wondering a bit more about the placement of the pen and the underlined line in the photo above, those represent the ten titles written by Karl Ove Knausgård. Alone.