Those of you who have followed this blog for many years know that I'm a scientist as well as being an avid book lover. So it should come as no surprise that one of my very favorite WITMonth activities is reading science nonfiction by women scientists from around the world! While I eagerly await new volumes and books to hit my shelves, here are four great (if rather geographically limited...) books by women scientists in translation! 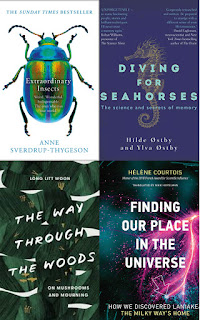 Extraordinary Insects (aka Buzz, Sting, Bite: Why We Need Insects) was a rather astonishing discovery for me as a reader. I'm not particularly fond of insects (in fact, I'm rather notoriously terrified of one type...), but Anne Sverdrup-Thygeson's excellent treatise on them (translated from Norwegian by Lucy Moffatt) completely swept me away. It's heartfelt and detailed and passionate in the very best ways, without forgetting to be informative and interesting. It's one of those books I've been gushing about since the moment I read it, and suffice to say that I was extremely excited when I learned that a new followup was being released! (Tapestries of Life)
Diving For Seahorses (aka Adventures in Memory), meanwhile, seems to plead a slightly better "popular science" case for itself. Cowritten by writer and scientist sisters Hilde and Ylva Østby (respectively, translated from Norwegian by Marianne Lindvall), the book is a smooth, literary-feeling scientific exploration of the brain and memory. While more anecdotal than heavily research-based, something about Diving for Seahorses nonetheless manages to tickle that scientific urge... particularly to learn more!
The Way Through the Woods by Long Litt Woon is, interestingly, yet another Norwegian popular science book! (Goodness, what is it with Norwegian popular science and where can I get more?) (This translation is by Barbara Haveland.) Here, the rather weird and wondrous world of mushrooms is merged with a culture of mushrooming and a larger story of grief. The book does a lovely job in balancing these three threads, but never sacrificing any one; you come out with a feeling that yes, you did just learn an awful lot about the lives of mushrooms and their different species and their growth and their prevalence and their biology. You just also learned a lot about humans. Isn't that cool?
Finally, Finding Our Place in the Universe is the (non-Norwegian!) astrophysical response to the world of popular science literature. Hélène Courtois's book (translated from French by Nikki Kopelman) may be relatively slim, but it's no lightweight, giving a surprisingly detailed background to the universe in its short span. This is a book that gives you a taste of what astrophysics (or rather cosmology!) is really like, in discussing both the observational aspects alongside the modeling/computational parts that are extrapolated from those observations. If you (like me) are a tiny bit obsessed with cosmology, you are bound to adore what this book does, as well as how it does it. There are lovely personal touches to the book that make it a fascinating read overall.
These are just a taste, of course, and I continue to seek out more scientific WIT titles! I look forward to the day when my list might comprise of titles from more countries and regions of the world (...sorry Norway...), but continue to delight in the science I have been exposed to for now.
Meytal Radzinski
Share