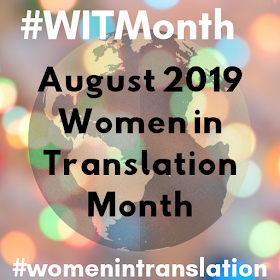 It's the first of August and that means... WITMonth! WITMonth has arrived!

Every year brings with it something new and miraculous and 2019 will be no different. This year sees new readers joining the party on a multitude of different platforms: We've got friends on Twitter (*waves*), Instagram, Youtube, hopefully some discussions on Goodreads, Facebook, and more. And it's not just the internet, either. As there have been in the past few years, there are plenty of lovely bookstore or library displays going up in various countries around the world. Many magazines are featuring women writers in translation this month (sidebar: if you can read Hebrew, feel free to check out this interview with me!) and also discussing the matter. Publishers have discounts and giveaways on their websites and social media. Translators are promoting their works, readers are sharing their TBRs, and the #WITMonth tag is getting busy.

This year, I'm organizing the "100 Best Women in Translation". The project (as mentioned in my last post) seeks to create a new canon. Rather than sticking with the tired, repetitive, and frankly not-that-great canon of straight, white, Anglo men, this is our chance - and I use the term "our" very deliberately! - to craft something a little different. Of course this list cannot be a definitive women-in-translation canon, but it can come close! Readers have been sharing their top 10 picks for the past month. The list is now just over 500 titles long, with almost 900 votes. Readers are encouraged to vote for their top 10 and share with as many other readers as possible, so that we get the most inclusive list possible! More than that, the list also eschews the "in translation" part of our challenge, but not the internationalism; any book written by a woman (or trans or nonbinary or intersex) writer in a language other than English (whether or not it has been translated into English or other languages!) is eligible. The final 100-strong list will be published shortly after the August 25th deadline, but all nominated titles will eventually be published as well, and I'll be discussing some aspects of the project throughout the month. (But no spoilers! The idea is for readers to come up with their favorites, with as little bias as possible.) See the official details below, or this video. 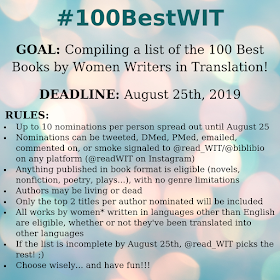 There's also the annual new releases database, which can be a useful resource for anyone looking for new books to read this month or throughout the year. Last year's list can be found here. I'll also be posting all sorts of recommendation lists and so on throughout the month, so keep an eye out, but in the meantime you can check out the various genre-specific lists I prepared last year.

This year will also seem some new projects. Rather than the standard statistics as published in years past, I've been working on compiling data from a wider range of publishers this year including all works in translation, regardless genre. As you all probably know, I respect the Three Percent database like nothing else (formerly here, now here), but its focus on first-time translations and fiction/poetry only does limit the degree to which we can fully assess the status of women in translation in English. This year's data will hopefully clarify some of the longstanding questions about how prevalent the women in translation problem really is.

I'm also expanding the statistics to something very new and different. Later this month, I hope to publish the first Hebrew-language author gender breakdown. While this analysis is also limited in as much as it covers only one language/country (and select publishers within it), I've found some pretty interesting things in the data and am looking forward to sharing it with you all.

I've got a few more ideas for WITMonth, but I'll hold off on them for now... don't want to ruin all the surprises. For now... sit back, relax, and... WITMonth!
Meytal Radzinski
Share